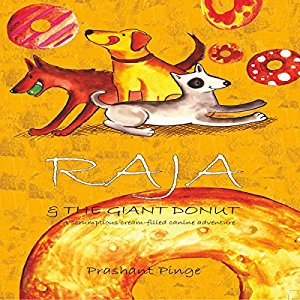 Raja, a golden brown stray mongrel, leads a carefree existence in Shivaji Park, spending his days lying under shady trees and chasing tennis balls. His friend Pakya, a white and black mongrel, happens to be the most feared dog on this side of the park. But, poor Pakya secretly pines for Bianca, a beautiful Golden Retriever, who only has eyes for Hero, a smooth-talking mongrel with a red scarf round his neck.

Tiger Gondhlekar, aka Gattu, an abandoned Labrador who is perpetually hungry, completes the trio. Prashant Pinge's engaging and heartwarming story, depicts the journey of three ordinary stray dogs from Shivaji Park in Mumbai to Sambhaji Park in Pune. Their reasons for undertaking the journey are different, but they are united by their friendship and a common dream, as they confront seemingly insurmountable odds. While the story charts their quest for the giant donut, it also highlights how the dogs overcome their own shortcomings, support each other and register personal victories along the way.