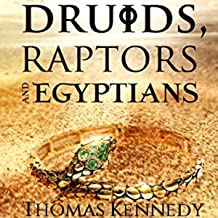 A pre-Celtic artifact transforms into a bracelet and climbs up your arm. And now you can speak any language. And you can travel "time-lines". Imagine a multi-universe with a time-line for every possible future and present.

When Kate, the daughter of an American professor, finds the bracelet, she and her friends are catapulted into the time-lines - into a time-line of sophisticated modern-day Raptor dinosaurs that regard humans as gourmet food. They also walk with modern pharaohs of Egypt.

Conchobar is a teenage runaway from Tir-na-Nogh (a Celtic mythological "Land of the Young"). He has lost his bracelet to Asil, the daughter of a farmer who is a modern Raptor in his time-line. Harrington, their Shoggoth (a being who performs a task) is actually a reporter with the prestigious Irish Times.

The Jamaican aunt of Kate's friend Lana accidentally uses Obeah magic to make Harrington fall in love with her, and the children have to bring him across the time-lines to break the spell. He becomes the oracle in the "Chapel of the Hearing Ear" in the time-line of the modern pharaoh, the ruler of the Western world.

The Egyptians think the Raptor Asil, in reality a teenager, is "Wepwawet, the jackal god of Abydos, lord of the Necroplis".

The Raptors want to use Conchobar's bracelet to transport the humans across from the Egyptian time-line to sell them in their Raptor time-line as gourmet food. They offer to make Conchobar the pharaoh if he will help them.

Kate and her team, aided by Policewoman Mary, set out to put a stop to all this