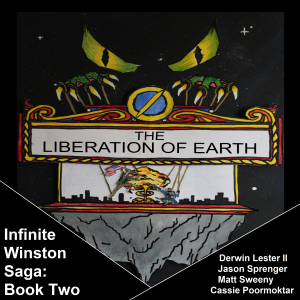 The Liberation of Earth

The Infinite Winston Saga continues in The Liberation of Earth!

In the timeline next door, Earth has been occupied by the alien Amphibite Empire since the Teddy Roosevelt Administration.

For one hundred years, the Amphibites have used the Human Soldiers of Earth to spread their control throughout the galaxy.

Winston Carmichael, a Sergeant First Class in The H.S.E., is retiring from military service and going to Indianapolis University. After seeing the horrors of the expansionist frontier as a soldier, along with fighting the rebel Rough Riders on Earth, Winston wants to join the elite Higher Caste and make life better for humanity. However, his hatred of all the terrible things he did in the name of Empire might be too much. The sobs of the local planetary nationals still kept him up at night. He wondered if the Rough Riders could sleep any better. Then he wondered if he should join them, just to kill as many Amphibites as he could.