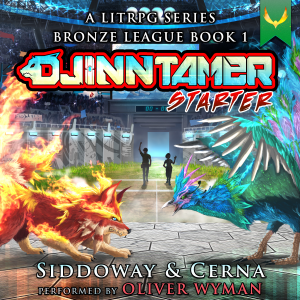 Jackson Hunt wants nothing more than to be a professional monster tamer - skilled trainers who raise and battle magical creatures called Djinn. He longs for the day when he comes of age and can leave home to pursue his dreams of taming Djinn.

To help his grandmother make ends meet, Jackson spends his days doing manual labor on a breeder’s ranch - just about as far removed from the bright lights and roaring crowds of the DBL (Djinn Battle League) as it gets. But no matter how hard Jackson and his grandma try, it’s never enough.

Facing bank foreclosure, Jackson is desperate to save his home but has no idea how…until he discovers a young, untrained Djinn left behind for him by his dead mother.

As time runs out, Jackson works tirelessly to raise and develop a bond with his Djinn. But monster taming isn’t as easy as the pros make it look. Along the way, Jackson and his friends will delve into the shady world of underground fighting, experience the agony of defeat and learn what it takes to be a true monster tamer.

Will Jackson and his Djinn level up fast enough or is his dream destined to die before it even truly begins?