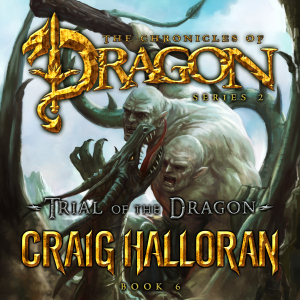 With the dragon king Balzurth, dead at the hands of the titans Eckubahn and Isobahn, it's up to Nath Dragon to take his father's throne. The task makes him uneasy as he must lead the dragons against the evil forces of the titans and wurmers. Inside his gut, Nath knows that something is wrong. How can he be the dragon king when he can't even turn into a dragon himself? His doubts continue to consume him.

In the meantime, the elves and dwarves plot and scheme to bring Nath Dragon to justice for the murder of their leaders, Laedorn and Uurluuk. Rallying unusual allies, they capture a distracted Nath Dragon and put him on trial. The result of their decision could be life or death and not for just him either, but his friends. All the while the evil forces continue to swarm Nalzambor.

Will Nath regain his confidence? Can his companions prove his innocents? Or will one more dragon king fall in the temple of deceit and evil?