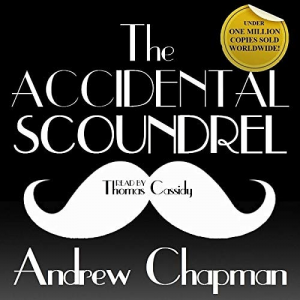 A group of elderly and bored aristocrats have taken to stealing rare and priceless items to pass the time. A young man named Richard gets swept up in their world when he gets engaged to the daughter of the dangerously unpredictable Lord Rochdale. Although Richard is not particularly comfortable with theft, or much of the roguish behavior that goes with it, he must prove to Rochdale that he has scoundrel potential in order to marry his daughter and, more importantly, stay alive.

With the help of a disgruntled horse and a genius street urchin Richard haphazardly stumbles his way through Rochdale’s trials and not only survives but gains the respect (although he’s not entirely sure how) of Lord Rochdale and his elite group of scoundrels. Now all he has to do is steal a priceless bottle of whiskey.

"Do we have a new Wodehouse?" (Robert Wingfield, The INCA Project)

"Anyone disappointed that Hugh Laurie's second novel never turned up will be glad they picked up The Accidental Scoundrel and gave it a damn good reading." - Jem Roberts, author of the upcoming official Fry and Laurie biography, Soupy Twists!