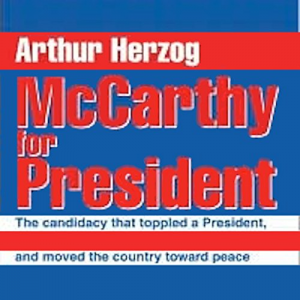 McCarthy for President; The Candidacy that Toppled Nizon

McCarthy for President: The words recall an endeavor both brash and quixotic, unpredicted and unpredictable, a political campaign of permanent interest to voters and historians alike. Even in defeat, the McCarthy movement racked up considerable success: the dramatic toppling of the president, pressure to initiate the Paris peace talks, the political involvement of most of the young generation, and a massive re-examination of the Democratic Party.

Arthur Herzog's account is no mere chronicle, and his vivid writing captures all the color and spirit which imbued the "Children's Crusade" from its first startling success in New Hampshire to the chaos and agony of the Chicago anticlimax. Much of what seemed destined to remain unknown about this unprecedented and erratic campaign is brought to life in McCarthy for President, the first authoritative account of a movement that began, in McCarthy's own words, "to give the system a test".