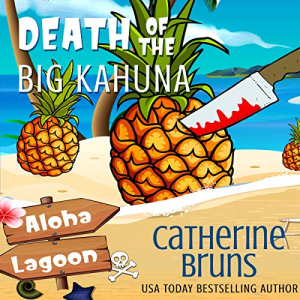 Death of the Big Kahuna

From USA Today best-selling author Catherine Bruns comes an Aloha Lagoon mystery that proves that, sometimes, paradise isn't all it's served up to be.

New to both Hawaii and the Aloha Lagoon Resort, Carrie Jorgenson has big dreams of stardom. But, while she awaits fame and fortune, she's forced to accept a job waitressing at the resort's The Loco Moco Café. It isn't long before she discovers the dish on her new boss - also known to many as "The Big Kahuna".

Hale Akamu is rich, handsome, repulsive...and dead. When Carrie discovers Hale's lifeless body, she's suddenly forced into yet another role: amateur sleuth. With everyone, from Carrie to the saucy chef to the café's hot assistant manager under suspicion, Carrie needs to track a killer before she becomes his next main entrée! Recipes included in the audiobook.