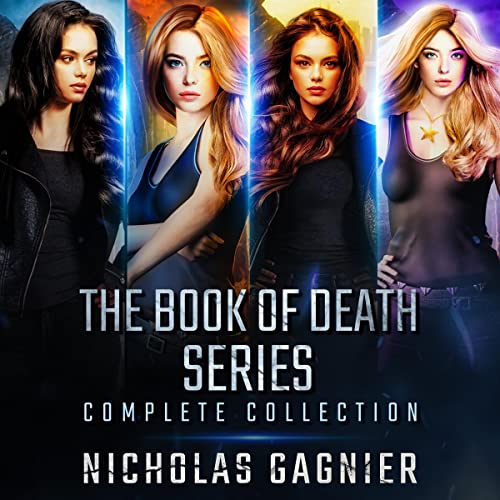 The Book of Death Complete Series

The spin-off to the groundbreaking Olivia & Hale series continues the adventure in this four-volume box set.

From the criminal underbelly of Washington, DC, in 1995, to the heavenly city of Atlas and purgatorial Shroud, these stories challenge the limits of urban fantasy, spinning their tales over a half-century of men and monsters.

Ramona Knox is a rookie FBI agent with a special advantage - since she was a little girl, Ramona has been visited by a suited man nobody else can see. This man claims to be Death, something the newly minted agent’s relationship with him will continuously transcend and defy. As Ramona’s lifelong friendship with the Grim Reaper develops, joining them to a suicidal immortal upon whose fragile state their destinies are hinged, the trio must face a deadly virus within an alternate timeline; fight a shadowy cabal in a cosmic metropolis, and defend Earth from complete annihilation when all of creation is threatened by a resentful, banished god and his army of dragons.

With agents of both the light and everlasting darkness trying to outmaneuver each other, can Death and his allies put the greater good before their own? Or, will they learn the same tragic lesson other powerful beings have been unable to avoid - that absolute power corrupts the most benevolent soul, absolutely?

Epic urban fantasy that is out of this world - get the collection today! Includes: