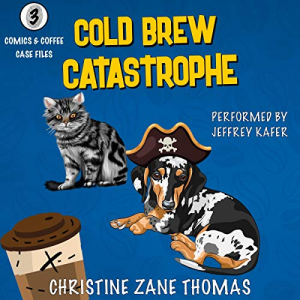 A decades-old body. A mystery that was never meant to be solved.

After taking part in two murder investigations, Kirby Jackson feels like his sleuthing days are over. His plate is full. He has his comic book and coffee shop to tend to, a stubborn dachshund to perk up, and a new cat who thinks she owns the place. Gambit, the dachshund, can’t get used to the idea of sharing anything - let alone an apartment - with Rogue, the feline wonder. The cat always slips away just when he thinks he’s got her cornered.

When a local teen goes missing during the annual Niilhaasi Pirate Festival, Kirby offers his and Gambit’s help.

What the two uncover shakes the small coastal community to its core...