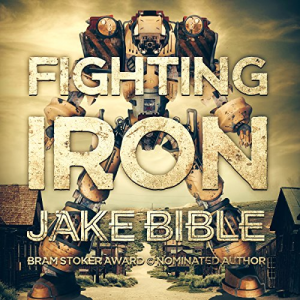 The Bloody Conflict is long over. The lands are now controlled by despots, crooked cattle barons, energy hoarders, and anyone with enough might to keep the local folks under control.

For Clay Macaulay, none of that matters as he roams the land in a war machine from a time gone by. He wants nothing to do with small desert towns or brutal dictators. He only has his sights set on a new life. Unfortunately for Clay, too many ruthless people want what he has. They want the war machine he pilots. They want the battle mech that shouldn't exist anymore.

They want his Fighting Iron.

But they will have to pry Clay's cold, dead body out of that pilot's seat before they can take it from him. And he plans on fighting them every massive mech step of the way!