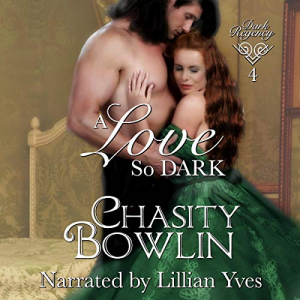 A Love so Dark

An enticing Gothic romance in the tradition of Jane Eyre and Wuthering Heights, A Love So Dark is a slow burn regency romance filled with mystery and intrigue.

Having no fortune, a negligible reputation, and an appearance that could only be described as plain, Miss Olympia Daventry has few prospects. Unless, of course, she elects to remain in her aunt's home dodging her uncle's amourous advances and his sermons, both of which are dished out in equal measure. Out of desperation, she accepts an offer of marriage from a man she has never met.

Married by proxy, she travels to his home and at her first sight of it, begins to wonder if perhaps she has not made a terrible mistake. Dark, ominous, foreboding - that description fits both Darkwood Hall and her new husband, Lord Albus Griffin, Viscount Darke.

Griffin had vowed never to marry, but the terms of his meddling aunt's will have left him no other option if he intends to preserve Darkwood Hall and the secrets it holds. But he'd instructed his solicitor to secure a wife for him that would never tempt him to consummate their union. And yet Olympia tempts him at every turn. She incites in him such lust and desire, such possessiveness, that he fears the madness that threatens all the men of his line has finally claimed him.

But there are other dangers lurking within the walls of Darkwood Hall, secrets and plots, enemies that will stop at nothing to destroy them. Tempted, torn, and tormented by wanting what he should not let himself have, Griffin is lost...but for once he is not alone.