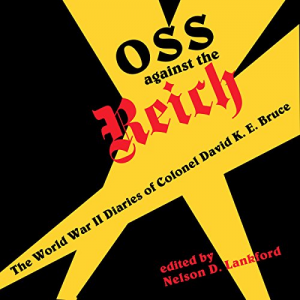 OSS Against the Reich presents the previously unpublished World War II diaries of Colonel David K.E. Bruce, London branch chief of America's first secret intelligence agency, as he observed the war against Hitler. The entries include eyewitness accounts of D-Day, the rocket attacks on England, and the liberation of Paris.

As a top deputy of William J. "Wild Bill" Donovan, founder of the Office of Strategic Services, Bruce kept his diary sporadically in 1942 and made daily entries from the invasion of Normandy until the Battle of the Bulge. Bruce had served in World War I and, as Andrew Mellon's son-in-law, moved easily in the world of corporate and museum boardrooms and New York society. However, World War II gave him a more serious and satisfying purpose in life; the experience of running the OSS's most important overseas branch confirmed his lifelong interest in foreign service. After the war, in partnership with his second wife, Evangeline, Bruce headed the Marshall Plan in France and was ambassador to Paris, Bonn, and London. He further served as head of negotiations at the Paris peace talks on Vietnam, first American emissary to China and ambassador to NATO.