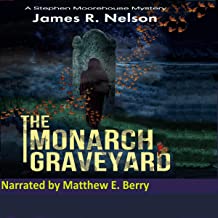 It’s been four years since Stephen Moorehouse spent his first summer at his Uncle Phillip’s mansion, Cliffside Manor.
The beautiful ‘scream-queen’ actress, Barbara Jenkins, shows up unexpectedly. Why is Phillip being so secretive about her visit?
Phillip’s friend disappears after attending a wedding in Florida, Phillip sends Stephen to investigate.
Paulie DeLuca, a menace from Stephen’s past, escapes from prison, frightening everyone at Cliffside Manor. Will he strike again?
A mysterious woman, dressed all in black, her face covered in a veil, shows up at the butterfly sanctuary Phillip has created in the memory of his long lost love. Why is she there? Why does she stand like a statue, not speaking, scaring the children? Something needs to be done.
All the action weaves together in The Monarch Graveyard to create another thrilling mystery by James R. Nelson.