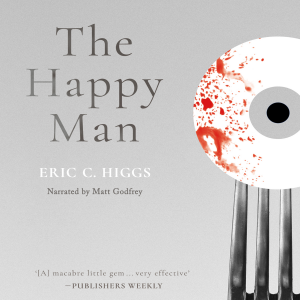 Charles Ripley has a good job as an engineer, a pretty wife, and an expensive house in a fashionable San Diego suburb. But it isn't until Ruskin Marsh moves in next door that Ripley realizes how passionless his life really is. Marsh, a connoisseur of the arts, high-powered lawyer, model husband and father, and effortless seducer of women, is so supremely alive that Ripley finds himself irresistibly drawn to him.

But after Marsh's arrival, local girls begin to vanish, marriages end violently, nights are split with endless, desperate screams, and horribly mutilated corpses are found. Soon, Ripley becomes caught up in an accelerating maelstrom of sex, drugs, violence, and ghastly, unimaginable rites...and begins to see the beauty of life.

"The Happy Man is an essential '80s horror read: smart, sharp, unforgiving, unlike anything else in the genre." - Too Much Horror Fiction

"[A] grisly shocker, understated for the most part but carrying the impact of a fist to the stomach...a most promising debut." - San Diego Union