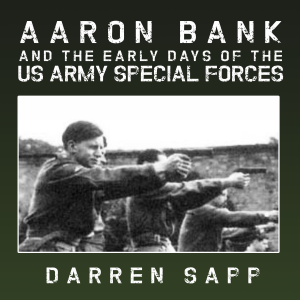 Aaron Bank and the Early Days of US Army Special Forces

Aaron Bank was an OSS Jedburgh in World War II and the subject of William Donovon's quote, "Tell Bank to get Hitler." He'd later become the inaugural commander of the 10th Special Forces Group, earning the moniker Father of the Green Berets. The development and use of unconventional warfare in WWII created a desire to develop permanent units for future wars.

Bank parachuted with three others behind enemy lines in France to work with the French Resistance in harassing the Germans retreat from Normandy. He followed that action by recruiting former Wehrmacht soldiers with anti-Nazi sympathies to kidnap Hitler and other high-ranking officers in the Alpine redoubt. Although that mission was called off, he gained more experience with a POW rescue mission in Indochina, even spending time with Ho Chi Minh.

These World War II experiences, followed by service in Korea, shaped Bank's view of the need to make an OSS-type force permanent in the United States Army. Under the leadership of Brigadier General Robert McClure, Bank joined Russell Volckmann and Wendell Fertig - veterans of guerrilla warfare in the Philippines - to play an integral role in the creation of the US Army Special Forces.