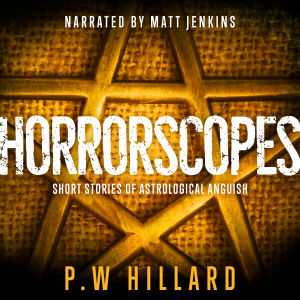 A haunted Manor. An energy drink with horrific side effects. Proof it’s possible to be too popular. Horrorscopes is a collection of short stories about the darker side of the zodiac. The first short story collection from the macabre mind of P.W Hillard. Dark and twisted, Horrorscopes is a look at how fortunes can be more far more sinister than they first appear. Featuring 12 short stories, each representing one of the signs of the zodiac; Horoscopes is a cavalcade of strange creatures, violent spirits and fountains of gore.

Aries - Jason and his crew plan a burglary, eager to take advantage of a now empty home after its owner passed. What they experience will teach them that the dead are best left alone.
Sagittarius - A young girl's dreams hint at something terrible. Scared of her abilities the truth proves something far more shocking and bizarre.
Libra - A woman experiences the most horrific thing known to man. A Job interview! Charlie soon learns her habit of judging can come bike to bite you.