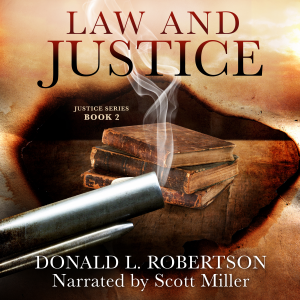 Bullets rip the air, snapping past Clay Barlow’s head as, riding Blue, he charges a band of robbers surrounding the Austin stagecoach. Clay lets loose with a load of buckshot from his 12-gauge Roper Repeating Shotgun. With his third blast, the robbers turn tail and race off into the Texas hill country, leaving one of their own dying in the hot Texas dust.

At 18, Clay has been invited to join the Texas Rangers. Now, he rides to Austin to either put on the Rangers’ badge or fight for the law in Texas courts, fulfilling his parents' wish that he become an attorney. Whether he protects Texas on the range or in the courtroom, his quick and deadly six-guns will not be stilled. Join Clay as his path takes him from brawls to blizzards to gunfights. The only question remaining is, will he survive to choose between law and justice?