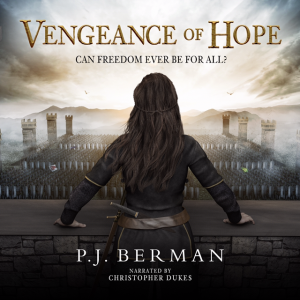 Vengeance of Hope, P.J.Berman’s explosive debut novel, marks the beginning of the Silrith series, a new power in the world of epic fantasy.

This opening book pitches you head first into the intense and unrelentingly dangerous Kingdom of Bennvika, a world of strong, powerful women and ambitious, ruthless men. As a bitter power struggle surges through the land, you are just as likely to die in a devious political plot as you are in the carnage of a great, bloody battle.

Your ears will ring with the clang of steel on steel. Your heart will tremble at the thundering of charging hooves. You will feel the cut and slash of blades as you follow three very different rebels in their desperate fight against a tyrannical king.

Silrith, the exiled Princess of Bennvika, stands shoulder to shoulder with her followers, sword in hand, ready to defend those in need of her protection. Yet she knows that if she falls, thousands more will also perish.

Ezrina, of the Hentani tribe, burns with desire for revenge against those who oppress her people, but more than anything she must fight to protect the woman she could be executed for loving.

Zethun, an ambitious young politician, yearns for a fairer world with a greater voice for the poor. However, for him and his followers, to speak the word ‘republic’ could be a fatally dangerous move in a land ruled by a despot.

Will the rebel factions succeed? Or in the indiscriminate butchery of war, will their disunity prove to be their downfall, bringing about the destruction of their world as they know it?

With vivid imagery, a punchy writing voice, detailed worldbuilding and an unapologetically fast pace, Vengeance of Hope has everything an epic fantasy novel needs.