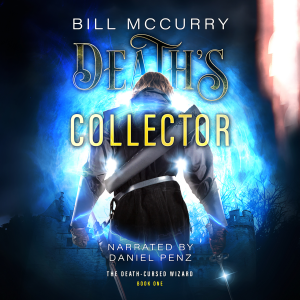 A wizard compelled to kill. A slaughter he vowed to prevent. A murderer who pissed off the wrong guy....

Bib the sorcerer hates how much he loves his job. Cursed by the God of Death to collect lives, he focuses his thirst on snuffing out only lowlife losers and contemptible ass-clowns. But when innocents under his protection are brutally murdered, Bib flips the switch on the ultimate revenge spree.

Bent on obliterating the bum responsible, Bib is more than a little miffed when he discovers the shocking truth about his own degenerate nature. But knowing the type of killer he is inside, the reluctant hero won’t be stopped until he mows down every evil dude in his path.

Can Bib fight his way to redemption before he loses his soul to bloodlust?

Death’s Collector is the first book in the darkly humorous The Death-Cursed Wizard fantasy series. If you like snarky heroes, top-notch magic systems, and epic sword and sorcery, then you’ll love Bill McCurry’s addictive tale.