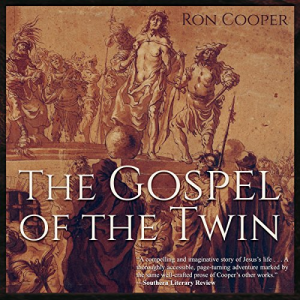 The Gospel of the Twin

An ancient legend claimed that Jesus had a twin brother named Thomas. An extra-biblical text that dates from perhaps as early as the late first century CE (which would make it the same age as the biblical gospels) claimed to be the secret teachings of Jesus as recorded by "Judas Didymos Thomas". The Greek word "Didymos" and the Aramaic word "Thomas" both mean "twin."

While only several Greek fragments of this manuscript, dating to the early second century CE, actually exist, a manuscript written in Coptic from the fourth century was discovered in 1945. This gospel of Thomas contains 114 purported sayings of Jesus, many of which resemble passages in the New Testament. Drawing upon years of extensive research in early Jewish and Christian history and recent work on the historical Jesus, acclaimed novelist Ron Cooper focuses on Thomas of Nazareth, old and bitter after years of self-imposed exile from his homeland, who returns to Jerusalem to write a book about his identical twin brother, Jesus. Disgusted by how others have perverted his brother's message, Thomas wants to set the record straight. But in doing so, he must try to unravel the enigma that was Jesus.

Provocative, inventive, and sure to be controversial, The Gospel of the Twin draws upon scriptural and ancient, non-biblical sources to present an imaginative version of the founding of Christianity through scenes of violence, tenderness, and mistaken identity that will change the way the world thinks about Jesus.