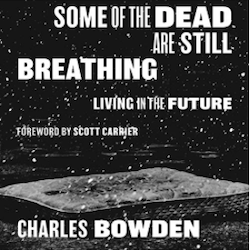 Some of the Dead Are Still Breathing: Living in the Future

The third book in Charles Bowden’s “accidental trilogy” that began with Blood Orchid and Blues for Cannibals, Some of the Dead Are Still Breathing attempts to resolve the overarching question: How can a person live a moral life in a culture of death?
As humanity moves further into the 21st century, Bowden continues to interrogate our roles in creating the ravaged landscapes and accumulated death that still surround us, as well as his own childhood isolation, his lust for alcohol and women, and his waning hope for a future. We witness post-Katrina New Orleans and terrorist-bombed Bali; we encounter our shared actions with the animal world and the desirous need for consumption; we see the clash and erosion of our physical and figurative borders, the savagery of our own civilization. A man of his time and out of time, Bowden seeks acceptance and a will to endure what may lie ahead.
The book is published by University of Texas Press. The audiobook is published by University Press Audiobooks.
"Bowden manages to write about these currently unfashionable topics with humor, style, and laconic compression." (Edward Abbey)
"Here is the new American nature writing - resourceful, funny, personal, full of good facts, words of the locals, hard-hitting but not self-righteous." (Gary Snyder)
"Bowden is a blood-and-guts journalist with a poet’s sensibility, a noirish naturalist, a ferociously inquisitive witness to life’s glory and horror." (Booklist)