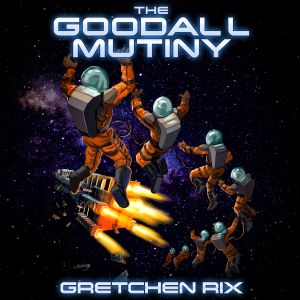 Joan Chikage is a young and untested lieutenant on the deep space cargo ship Goodall. She lives in her head most of the time, and what she wants most in the world is to stop being scared. To prove her mettle. To show her capricious captain that she’s worth his respect.

But that’s not possible stuck in the laboratory running tests on beetles. So she tries excelling at her task, until suddenly her beetles don’t matter anymore. The captain she both admires and fears unceremoniously jettisons her part of the ship and leaves Chikage and her crew to die. Without warning, without explanation, Chikage gets the chance she’s always wanted. To be a hero.

A coming of age adventure set in deep space. A young woman uncertain of her strengths gets the chance to change. Fast paced. Unexpected. Space opera. There’s even a cat in it.