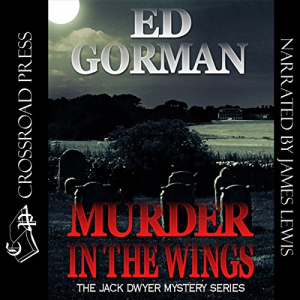 Murder in the Wings

Jack Dwyer, ex-cop turned amateur actor, is delighted when his agent lands him a role in a local production of Long Day's Journey into Night. The real drama starts, however, when Michael Reeves - the play's angry, bullying director - is found murdered, and Dwyer's friend Stephen Wade, a sweet has-been of an actor, is charged with the crime. Dwyer knows that Wade has been set up. But who did it? And why?

Was it David Ashton, an apparent fortune-seeker and heir to the Bridges Theater by marriage; or Richard Keech, the handsome, pushy young actor who shared the woman whom the dead man loved? Or could it have been Anne Stewart - the aging actress who carries a secret as dark as that of the character she plays? And what of Lenora Bridges, the matriarch of the theatrical family, who never comes out of her room in the building high above the stage?