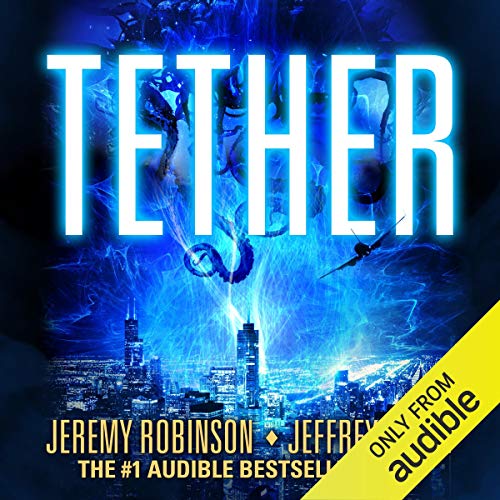 Best-selling author Jeremy Robinson returns with Tether, another entry into the genre he created—the kaiju (giant monster) thriller—this time turning it on its head.

In the middle of the night, an explosion rocks Cambridge, Massachusetts, and wakes Saul Signalman. Blue, ethereal light pulses in the sky. A video call from his wife shows her consumed in bright light, but the call ends abruptly. The explosion of light intensifies. The power goes out, and electronic devices stop working. Saul races to his wife’s lab at the explosion’s core, but the building and his wife are gone.

All that remains is a test subject named Rain, a woman with no memory, whose eyes glow and whose body lights up the night when monstrous nightmares descend on Boston. Her creators will stop at nothing to get her back. Pursued by a rogue government agency, Saul goes on the run with Rain—the only person who might be able to explain what happened to his wife. Rain might also know how to stop the otherworldly terrors that are wiping out cities.

Jeffrey Kafer is back as the voice of Robinson’s Nemesis series, pulling listeners into a supernatural world of monsters, madness, and malevolent agents that will keep them on the edge of their seats until the very end.

"Kaiju" means "strange beast" in Japanese and refers to giant monsters such as Godzilla, Gamera, and Jeremy Robinson’s creation, Nemesis.