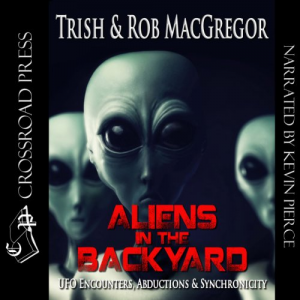 Aliens in the Backyard: UFOs, Abductions, and Synchronicity

In the early morning hours of March 28, 2011, Charles and Helene Fontaine experienced something that shattered their beliefs about the nature of reality.

One evening in 1981, Connie J Cannon was on I-75 with her young son, en route to their new home in Florida, when they suddenly found themselves on a military base, with a man in uniform holding a gun to her head as three Grays stood nearby.

In 1979, Diane Fine was on her way from upstate New York to Vermont to see an obstetrics specialist for her high risk pregnancy, and experienced two hours of missing time. When she was finally examined at the clinic, she was told wasn't pregnant.

In 1970, pilot Bruce Gernon was chased by something through the Bermuda Triangle and he has been talking about it ever since - to UFO Hunters, the Discovery Channel, National Geographic, the History Channel, the Sci-Fi channel, and all their foreign counterparts.

These individuals have never met. But they share something significant. In 2003, a Roper Organization survey revealed that 33 million Americans may be abductees. Aliens in the Backyard is their story.