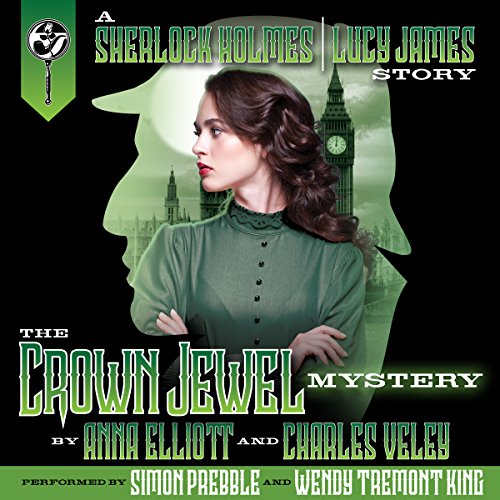 London, 1895--American actress Lucy James is on a mission to find her true heritage. The few clues she has managed to unearth have led her to a safe deposit box inside the Capital and Counties Bank. With the help of her friend Johnny Rockefeller, she attempts to break into the box and learn the truth. But her plans are foiled when real bank robbers show up, and she and Johnny suddenly find themselves in serious peril.

Sherlock Holmes is on a mission of his own. A young man has been found murdered in his bed, and the famed sleuth has found few clues to go on, other than a mysterious woman who seems bent on causing trouble. Just as Holmes begins putting some pieces of the puzzle together, he is called to help stop a robbery at the Capital and Counties bank--the very bank where the murder victim worked as a guard, and where Holmes keeps his accounts.

Will Lucy evade danger and find out who she really is? Will Holmes foil the robbery and catch the killer? Or will the truth evade them both, and leave them in mortal danger?

This novella-length prequel to the Sherlock and Lucy mystery series has it all--twists and turns, near-misses, and a fast-paced and fun storyline that will leave the reader guessing breathlessly. The Crown Jewel Mystery stays faithful to the spirit of the beloved original series, while opening the door to new characters, a new dynamic, and fresh new mysteries to be solved. Read and listen with Whispersync on Audible!