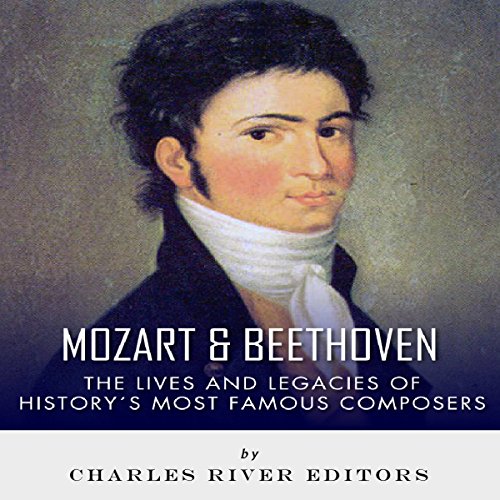 This audiobook analyzes the themes and progression of the composers' most famous works, comparing and contrasting them to each other and other composers' great works.

Wolfgang Amadeus Mozart (1756-1791), baptized Johannes Chrysostom Wolfgangus Theophilus Mozart, is widely considered to be the culminating figure of the classical period in music, which spanned much of the 18th to early 19th centuries. As such, he is remembered as one of Western Civilization's most prodigious and spontaneous natural talents, on par with Leonardo da Vinci and Johann Sebastian Bach.

Among all of history's greatest musicians, few have been as admired or influential as Ludwig van Beethoven, whose name remains synonymous with composing. Works like his fifth and ninth symphonies remain instantly recognizable over 200 years after they were composed, and their sweeping and grandiose nature are made all the more amazing by the fact that their author was gradually going deaf and couldn't hear music very well by the time he was composing them. Similarly, the "Moonlight Sonata” and "Für Elise" are renowned across the world and are some of the most famous piano pieces of all time.