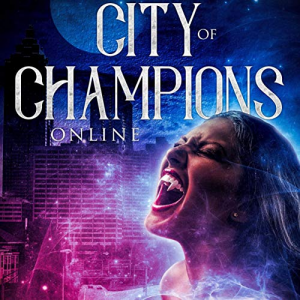 Having found the tragic truth that an art degree is worth less than the paper it is printed on, Jacquelyn Jones is frustrated with her dead end work as a graphic designer for a marketing firm, finding new ways to try and convince people that this week's 50 cent off sale is actually worth driving to the store. She's tried other VRMMORPGs, but they've all been fantasy-based, with a couple sci-fi games thrown in. But she wants something more, something Super.

Superhero VRMMOs have had a...subpar reception in the past, in part due to the fact that the nature of most MMOs makes for fairly unheroic tales. After the couple hundredth time blasting the same group of mooks from the same faction on the same street corner of the same city, using the same powerset as everyone else because you only have a few options, it is hard to think of yourself as a hero anymore.

But then she heard about City of Champions Online. For the first time, a developer partnered with a tabletop RPG maker to use their system to create a VRMMORPG, and it was one of the systems designed to be used with superhero games! And despite the name, there was no getting stuck in the same city as all the other players. The game world was a detailed replica of the real world, down to having some of the same shops and restaurants in town. She could be whoever she wanted, whatever she wanted.

Now, she just has to find a way to become the heroine she's always wanted to be.

The world of CoC is not a happy one, but it is not grimdark, either. It is like the world we live in, but with superheroes and game-like elements, where the ones regarded as heroes aren't always the most heroic amongst us. While the main characters in CoC are not as...extreme as those in my other stories, and at least try to be heroes, there is material some will find disturbing.

This is a compilation of Issues 1-5 of City of Champions Online.