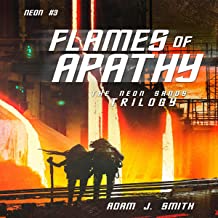 Far beneath the city’s depths burns far more than the fuel that feeds it. Stuck in the same dead-end job as his father, Rylan drinks himself into oblivion most nights. Better than the oblivion of the Link, everyone around him a slave to virtual reality. At least that’s what he tells himself. His ex, Clarisse, has found herself a new lover, someone with more than a passing interest in him. They have a job for him, and it involves explosives. Best just to drink this one off. Wait it out, until everyone has regained their senses. That’s the trouble though; everyone acts like robots and he feels like the only one with any sense. Any emotion. Emotion that triggers violence when a new friend exposes the wound inside his heart. A sci-fi dystopian adventure beneath the hyper-tech city of Neon, Flames of Apathy is the third book in an epic series that will explore Man’s technological and innate potential, and the search for hope when all looks bleak. Praise for the Neon series: “Neon Sands is sci-fi with conviction, and that conviction displays most evidently in setting. A world built of glorious and alienating sands, both a marvel and irritant. Chocka with filmic interludes, glowing horizons, red dusty skies. This novel quietly won me over.” “It has great tension and some wonderful world building details which hook you in to the claustrophobic existence of the characters.” “The tension really is well maintained throughout and the sense of mystery, high-stakes and justified paranoia that the characters experience is excellently portrayed.” Neon Sands trilogy 3/3 Neon series 3/9