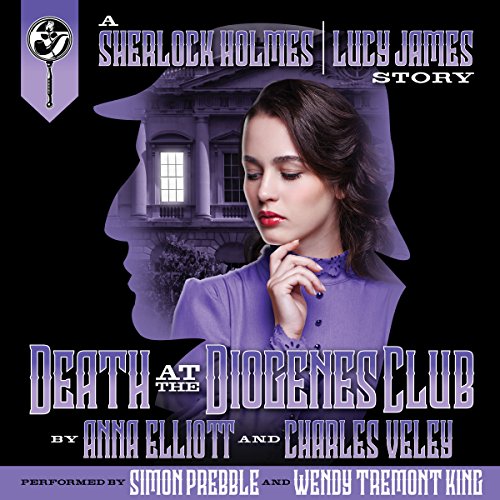 Death at the Diogenes Club

London, 1897--After narrowly cheating death in their last case, Lucy James and Jack Kelly are both on the mend. Jack's injuries are serious, and his recovery is slow. As Lucy attempts to nurse him back to health, she finds that her feelings for him are growing more intense every day. But does he feel the same?

Jack is a proud young man intent on making his way in the Metropolitan Police force. His plans to get back to full crime-fighting strength don't include help from anyone, especially Lucy. He is determined to keep her at arm's length. After all, a beautiful woman like Lucy could never care for him the way he cares for her. Or, could she?

In the meantime, Lucy and her father, famed detective Sherlock Holmes, are called to the Diogenes Club, where a retired general has been murdered in cold blood. The killer must be found, but there's a catch. The body is found in a locked room, and there are few clues, if any, to go on.

Just as the duo is making headway, they realize the crimes are just beginning. Soon Lucy, Holmes, and Jack find themselves in lethal conflict with the most ruthless gang leader in London, who is determined to eliminate his enemies. Lucy won't let that happen. But can she guard her heart while she protects those she loves?

A fun and fast-paced take on a classic Sherlock who-done-it, with unexpected twists and turns, a strong, feisty heroine, and a touch of romance. Narrated by Holmes's daughter Lucy, Death at the Diogenes Club stays faithful to the spirit of the beloved original series, while showing the true value of family and friendship. Read and listen with Whispersync on Audible!