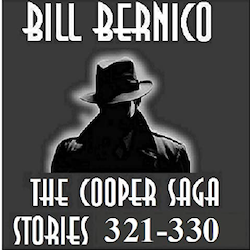 I started writing these Cooper stories in 1989 and have managed to amass a total of 340
Cooper stories to date. I’ve bundled them in groups of ten for convenience sake. The Cooper
stories start in 1946, when the original Matt Cooper left the L.A.P.D. to open his own private
investigations office on Hollywood Boulevard. Over time, his son, Clay would join him in the
family business and as time goes on, Matt would eventually die and Clay’s son, Elliott would
take his place as the third generation in the business.
Upon Clay’s retirement, Elliott hired a woman P.I. named Gloria, who would eventually
becomes his wife and business partner. Their son, Matt (named for his grandfather) would
eventually take Gloria’s place as the fourth generation Cooper when she became of retirement
age. As for the fifth generation, Matt and his wife, Chris had twins, Nicholas and Veronica,
who would assist Matt in the business until he could retire.
Later in the stories (#211 – “Tree of Life”) Veronica is killed and now it’s just Nick
running the business. Nick and his wife, former L.A.P.D. detective, Shelley Lorenz, manage the
P.I. business until their adopted son, John (Veronica’s son) comes of age, bringing us to the
present days where Nick and John (the sixth generation) are successfully running the family
business after Shelley’s death in story #301 (“Bright Future”) Tree of Life and Bright future are
my only two Cooper novels, all the others being short stories.
For those of you into dates and details, the math doesn’t quite work out. I don’t believe
you can fit six generations in the time frame between 1946 and now. That was done on purpose
to keep the timeline moving. Just sit back and enjoy the ongoing saga of the Cooper family.
More stories will be forthcoming, I promise.