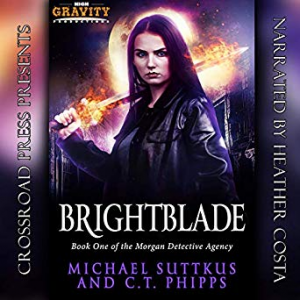 Psychic. Superhero. Spy. Detective. Bounty hunter. Ashley Morgan has been many things and failed at all of them. The 28-year old has her whole life ahead of her but has already resigned herself to working a dead-end job bringing in the debt-ridden supernatural criminals of New Detroit.

A chance encounter with the vampire sheriff reveals a secret that motivates her to change her life forever: Her long-missing brother Arthur is alive (in a manner of speaking).

Ashley sets out on a quest to not only find him but also deal with old lovers, treacherous criminals, a magic sword, and a quest to raise an ancient vampire from the dead.

Brightblade is set in the same world as the Red Room series, The Bright Falls Mysteries, and Straight Outta Fangton.