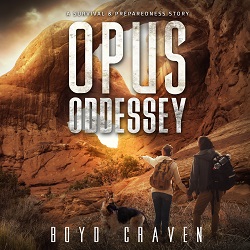 Almost a year after Rick walked back into Tina’s life, they find themselves at a virtual crossroads. It’s time for Rick to meet Tina’s family. Opus has healed from his gunshot, though he’s a little older and slightly slower.

Setting out to meet the parents becomes an epic adventure in Rick and Tina’s mind. Because of timing, they decide to road trip across the USA. Tina chronicles their experiences with a camera and Facebook Live videos, while interviewing Rick.

Cryptic and threatening messages keep turning up, bad luck follows the couple on their trek across the country. To make matters worse, Rick fears a cyber breach, and somebody from both of their pasts is released from prison.

Watching over them, one dog, who’s used to protecting the humans he owns. Opus. He is happily along for the ride to make sure they don’t do anything they would regret, but when the fur starts to fly, he comes out of retirement.
When the bullets start buzzing through the air, and a mad dash across a desert landscape ends them up slightly lost, it’ll take Rick, Tina, and Opus to work in concert to survive the ordeal. Unfortunately, that isn’t the worst of it.

They find themselves alone, cut off, stuck in the desert without their preps, hunted by a madman with no fear of death. Can the trio survive?