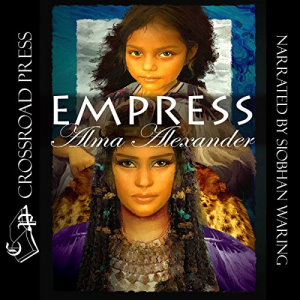 In Alma Alexander's enthralling new novel, Simonis is a woman who lived many lives before rising to the top - a helpless child in circus performances, an accomplished courtesan and spy, a heretic who sheltered men thought to be damned for what they believed.

Emperor Maxentius is the man who loves her enough to drape the Imperial purple over her shoulders even though his entire culture recoils. When he marries Simonis and gives her the name Callidora, he makes her a partner in the ruling of the empire.

When the Empire faces a rebellion that appears unstoppable, Maxentius and his generals are prepared to flee the raging mobs. But Callidora announces that the men can do what they want, but she will not run.

The men are shamed into standing their ground and the Empire survives.

Based on the historical characters of Emperor Justinian and Empress Theodora, this is a grand, gorgeous, sweeping, utterly unforgettable vision of an already amazing tale.