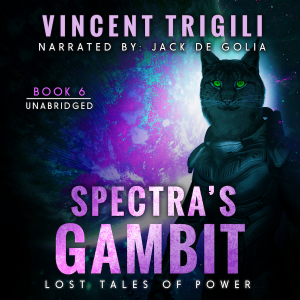 An old ally of Grandmaster Vydor comes to him for help because an enemy, perhaps as old as the Empire itself, has turned its sights on the Cathratinairian race and means to wipe them out. Spectra and Dusty are sent to find and stop this new threat, while Spectra begins her plan to change the balance of power for the entire known multiverse. Dusty must decide whether to follow Spectra as she uses this mission of mercy for her own gain, or stand with the Wizard Kingdom, which would put him in direct opposition to his wife.

The Lost Tales of Power is an open-ended series of science fantasy books set in a vast multiverse. Spectra's Gambit is the sixth book set in the Lost Tales universe.

Volume I - The Enemy of an Enemy

Volume IX and beyond: TBA