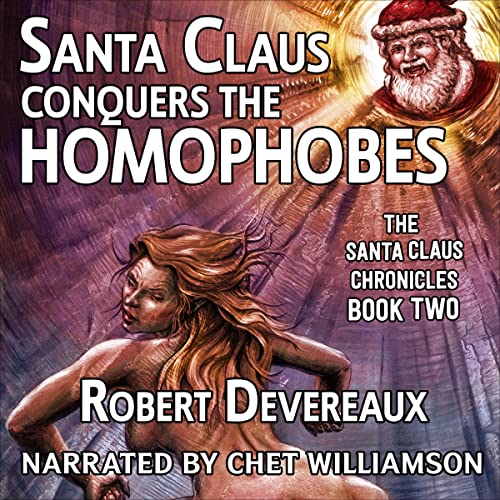 From one of the most original voices in fantastic fiction, Lambent Light Publishing presents Robert Devereaux’s second novel about Santa Claus, the Tooth Fairy, and the Easter Bunny, SANTA CLAUS CONQUERS THE HOMOPHOBES. [PLEASE NOTE: Robert’s Santa novels are NOT for children.]

From Tim Byrd: “Devereaux is a wonderful writer, and constantly amazes with his inventiveness. His treatment of what you might call the mechanics of wonder, the way magic actually works in his literary world, is earthy in its matter-of-factness and lovely in its effects. His characters are full-bodied and layered, his depiction of the sacred both accessible and transcendent, and his allowance for redemption for any and all entities, no matter how saddled by personal weakness they may be, is more truly spiritual than any boxset of Touched By An Angel could ever be. In his SANTA novels, Devereaux has crafted a literary universe unlike anything else on the shelves, and it's a universe I'll revisit any chance I get.”

And from the back cover:

Santa Claus is back.

And flying beside him is Wendy, his freshly minted stepdaughter, who can peer into the future of selected children and offer them glimpses of the wonders ahead. But with that power come horrific visions of the turmoil and trouble the less fortunate among them are fated to suffer.

Can Wendy and her stepfather prevent the suicide of Jamie Stratton in his teen years, as he grows up gay in a homophobic household and community?

God the Father grants them three Thanksgiving visits to Jamie's tormentors, in hopes of bringing about a change of heart in them and eliminating their ingrained prejudices. Beyond the challenge of rescuing one precious child lies the far more daunting task of expunging entirely this brand of bigotry from the human race, as Santa and Wendy strive to remake the world in compassion and generosity.

Along the way, they enlist the aid of the Easter Bunny, a highly persuasive fellow indeed. But the Tooth Fairy and her loathsome imps are hell-bent on doing all they can to stop Santa and Wendy--nay, to heighten mortal fear and hatred of anyone whose orientation strays even the slightest from the norm.