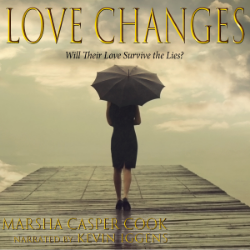 Second chances are possible, but only if the lies and compromises are gone.

Martin had lost his first wife and daughter in a horrible car accident, and it took him years to fight the sadness he woke up with every day. When he met Elaine, everything changed. He married her and their new life made Martin forget all the pain. Once again, life was good.

After feeling such happiness the second time around, Martin never expected tragedy to once again come knocking at his door. But it did. If Martin had known the truth about Elaine’s past he would have been able to help her, but her fear of the truth became her reality and the fact that they loved each other didn’t seem to be enough. Elaine came up with a solution she thought would be for the best. Martin went along with her plan, but it put him in a compromised position and very unhappy. However, he loved his wife so much he agreed to live her lie.

The stakes were very high, but Martin thought he could change her mind over time. But as the years passed, the only thing that changed was Elaine. She became withdrawn and uneasy. Eventually, things got out of hand and Martin couldn’t control anything that happened. It was a downward spiral, and everything they had worked to achieve began to crumble.

Could Martin save his wife from herself? Would Elaine let that happen?