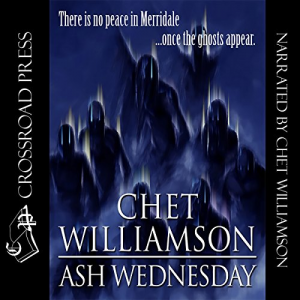 In Merridale, semi-transparent blue apparitions have appeared. These aren't ghosts, exactly. They are visions of the dead in their final moments - the last seconds of their lives portrayed for all to see. They don't move, and they don't speak.

Ash Wednesday is a thoughtful horror story about what happens to people when they are forced to gaze into the face of death and, specifically, the face of their own personal dead: their friends and family, those they believed to be dead and gone. Murders are revealed, rapes, and other crimes. People despair, and try to create new lives out of the wreckage. Two of these are Bradley Meyers, a vet already driven half-crazy by his experiences in Vietnam, confronted by the sight of his dead son, and now barely capable of containing his rage, and Jim Callender, whose son has died in the same accident, for which he is partly responsible. As Callender sinks into guilt, Meyers moves toward murder.

This edition of Ash Wednesday contains a final portion that was not included with the book when it was first published. It was removed due to an editorial decision to which I acquiesced. After the book appeared, the last chapter was published in Bill Munster's excellent small press magazine, Footsteps. The entire book as originally written appears here, and in the accompanying audiobook, for the first time.