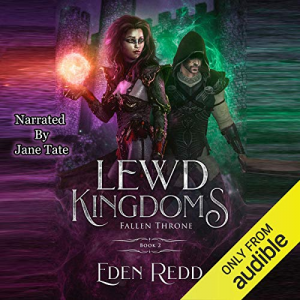 Edric wanted to build something great, a safe haven for players and awakened NPCs to thrive in peace. With his fellow rulers, Faye, Claudia, and Rayna, they feel they are on the cusp of something grand and inspiring.

When trolls are found murdered on Eloran streets and the dead walk at night, the city soon realizes there is something darker taking place in the supposedly peaceful kingdom. With the delicate political balance in jeopardy and war threatening all of Lukken, Edric and his fellow rulers must come together to discover these secret threats before it is too late.

Can Edric balance the needs of the city, diplomacy, and his heart before shadowy forces converge on the small kingdom? Can the four rulers of Elora stand up to an ancient evil that threatens the entire digital realm? Can their hearts withstand a coming storm no one can escape?

The Lewd Saga is a virtual MMORPG based in the fantasy world of Lukken, home of dragon royalty, human kingdoms, and troll masters. Players quest, grow their abilities, join in great battles, and find love and lust in whatever form they desire. There is no taboo too great or too intimate.