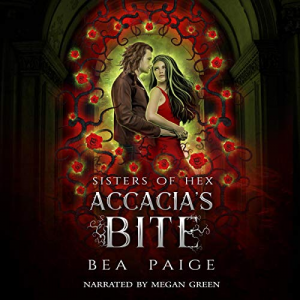 Alongside her Dark Knights, Accacia must play her part in breaking the curse or remain under the Queen's rule forevermore.

Yet, how can she do that when Devin is losing his soul to the darkness, to a fate far worse than death? If Accacia cannot save his soul, then the battle is over before it’s even truly begun.

The stakes are high in this final installment of Accacia’s journey as she heads into the danger of the queen's castle. Sacrifices will be made, friendships forged, and alliances sought.

Accacia's Bite will conclude Accacia’s journey, but not the Sisters of Hex series. The fate of the clans and the people of Ever Vale will continue with the next "sister", Fern and her Angels of Death. Five sisters, five clans, a curse, and whole host of supernatural creature.