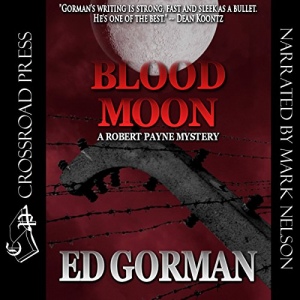 Former FBI agent and psychological profiler Robert Payne is on the trail of a serial killer. A 12 year old girl has been murdered and mutilated, and the detective assigned to the case wound up dead. Now Nora Conners, the girl's wealthy mother, has hired Payne to solve the murder and bring closure. After narrowing his search to three men, a televangelist, a honey salesman, and an art teacher, all living in the small Iowa town of New Hope, Payne begins to narrow the field, posing as a journalist.

That's just the start. As the daughter of one of the suspects joins the list of victim, and the woman who hired him is murdered, Payne finds himself on a race to solve the case before he himself is implicated.

Taut, suspenseful, and filled with the quirky details and character flaws that are the hallmark of Ed Gorman's fiction, Blood Moon is a wonderful introduction to a very memorable character. Be sure to follow his adventures through the other three Robert Payne novels, Hawk Moon, Voodoo Moon, and Harlot's Moon.