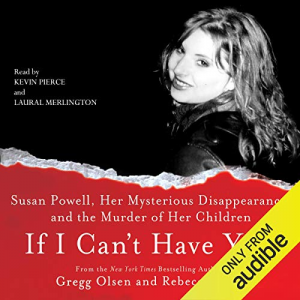 If I Can't Have You: Susan Powell, Her Mysterious Disappearance, and the Murder of Her Children

Best-selling author Gregg Olsen and co-author Rebecca Morris investigate one of the 21st Century's most puzzling disappearances and how it resulted in the murder of two children by their father.

Every once in a great while a genuine murder mystery unfolds before the eyes of the American public. The tragic story of Susan Powell and her murdered boys, Charlie and Braden, is the only case that rivals the Jon Benet Ramsey saga in the annals of true crime. When the pretty, blonde Utah mother went missing in December of 2009 the media was swept up in the story - with lenses and microphones trained on Susan's husband, Josh. He said he had no idea what happened to his young wife, and that he and the boys had been camping in the middle of a snowstorm.

Over the next three years bombshell by bombshell, the story would reveal more shocking secrets. Josh's father, Steve, who was sexually obsessed with Susan, would ultimately be convicted of unspeakable perversion. Josh's brother, Michael, would commit suicide. And in the most stunning event of them all, Josh Powell would murder his two little boys and kill himself with brutality beyond belief.