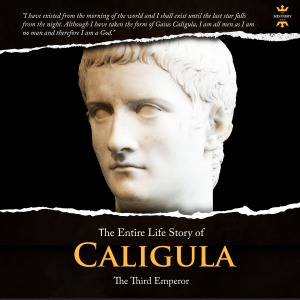 Caligula was born into the first ruling family of the Roman Empire, conventionally known as the Julio-Claudian dynasty. He is described as a noble and moderate emperor during the first six months of his rule. After this, the sources about the reign of Caligula focus upon his cruelty, sadism, extravagance, and sexual perversion, presenting him as an insane tyrant.

The First Dynasty of Rome
The New Emperor Takes the Throne
A Changed Man
A Very Un-Roman Emperor
It’s All True...or Is It?
Poison Pens
Lessons to Be Learned
Believe It or Not, He Had Good Qualities
Famous for Bad Behavior
And much more!
Caligula was assassinated because of a conspiracy by officers of the Praetorian Guard, senators, and courtiers. On the day of the assassination of Caligula, the Praetorians declared Caligula's uncle Claudius as the next Roman emperor.

Although the Julio-Claudian dynasty continued to rule the empire until the fall of his nephew Nero, Caligula's death marked the official end of the Julii Caesares in the male line.

Don't hesitate to buy the audiobook to learn more!