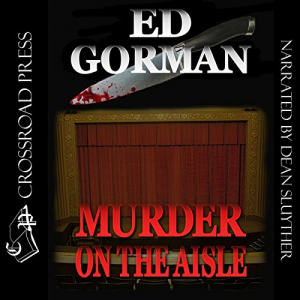 Murder on the Aisle

Peeps takes movie reviewing to new heights of viciousness. On this prime-time TV show, two caustic critics look at the hits and misses among the new movies, trading wits, insults - even punches.

But even a series with high riatings like Peeps can stare at cancellation - not by the networks, but by murder. Because Dunphy has just been found with a knife in his back in the dressing room of Tobin, his co-host and sparring partner. The cops' script says Tobin - who'd secretly shared the affections of Dunphy's wife and brawled on air with Dunphy the night before - has the motivation for the part of star suspect. But for Tobin, the accusation is hardly entertaining, and he sets out to find the real killer in the cast.

About the author: Ed Gorman is an award-winning American author best known for his crime and mystery fiction. He wrote The Poker Club which is now a film of the same name directed by Tim McCann.