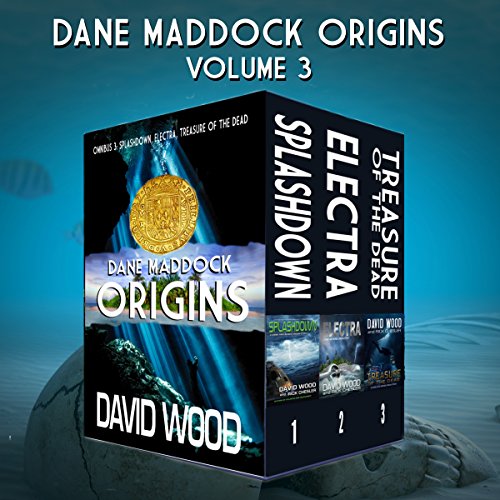 Splashdown
1961- Space capsule Liberty Bell 7 crashes into the Atlantic Ocean and sinks in what was called an accident. But was it?

When Navy SEALs Dane Maddock and “Bones” Bonebrake are called upon to find the Liberty Bell 7 and recover its secret cargo, they find themselves caught up in a conspiracy from the Cold War era, and only they stand in the way of a powerful man bent on vengeance. Dane and Bones are back in another “Origins” adventure. Sunken ships, deadly creatures, dangerous enemies, mysteries from the past, and all the thrills your heart can stand await you in Splashdown!

Electra
In 1937 Amelia Earhart vanishes somewhere over the Pacific, giving rise to one of history's most confounding puzzles.

When searchers believe they have found the location of Earhart's crash-landing, Navy SEALs Dane Maddock and Bones Bonebrake are sent on a covert mission to locate Earhart's crashed Electra aircraft and recover its contents. But nothing is ever easy for Dane and Bones. They soon find themselves facing off against mercenary forces, deadly creatures, and nature itself. Join Dane and Bones on another action-packed adventure as they head out in search of Electra!

Treasure of the Dead
Maddock and Bones set off on their first treasure hunting adventure!

1715 - Blown far off course, their treasure-laden ship sinking, a crew of Spanish sailors struggles ashore, only to encounter a horror out of their worst nightmares.

Dane Maddock and Bones Bonebrake have left the Navy SEALs and set out on a search for the legendary lost treasure fleet. The search takes them to Haiti, where they encounter the forces of a madman bent on finding the treasure in order to fund his maniacal experiments and help him seize the power he craves. But not all their foes are human. Mystery, history, and legend meet as Maddock and Bones scour ancient ruins, plumb the depths of the sea, and come face to face with pure evil in their quest for the Treasure of the Dead.