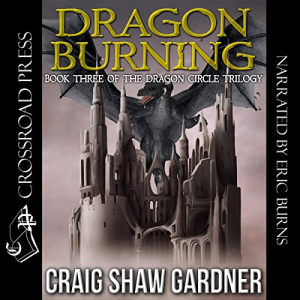 In Dragon Sleeping, 17-year-old Nick Blake and the ordinary suburbanites of Chestnut Circle were transported to an extraordinary realm of magic and might, becoming pawns in an unending battle between two wizards named Nunn and Obar for control of an immortal, all-powerful dragon.

In Dragon Waking, loyalties formed and friendships shattered as neighbors battled neighbors, and Nick Blake once again shed blood for his family. And finally, the ultimate power awakened beneath their feet - the power that could cleanse the world with flame.

Now, in Dragon Burning, the war between the wizards will come to an end. The citizens of Chestnut Circle will have their day of reckoning. And Nick Blake will finally know his destiny. For the Dragon has awakened, and its fire is beyond anyone's control.

Craig Shaw Gardner has crafted an adventure for the ages, epic in its scope, stunning in its vision, and brilliant in its originality. An adventure that leaves no doubt that Gardner now resides among the most daring and ambitious authors in the fantasy field.