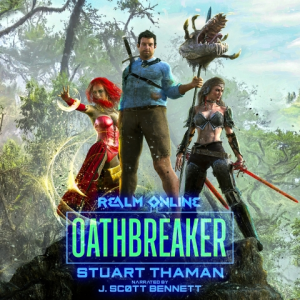 Steve's just an accountant with a serious MMO addiction.

In the game, the people of Tamernil live under the harsh rule of a vile bureaucrat, and Bokta - an outcast blood witch practicing forbidden magic - has a bold plan to save them all. She'll need to summon a powerful demon, one she's been watching through a scrying mirror for years.

There's just one hitch: the mighty demon she's been watching isn't real. He's a character in Realm of Crafted War, and the man behind the keyboard is a far cry from a savior.

Violently dragged into the world of Realm Online, Steve will have to learn how the hell he's going to survive, all while masquerading as Maxkrannar, the demon Oathbreaker he's supposed to be.