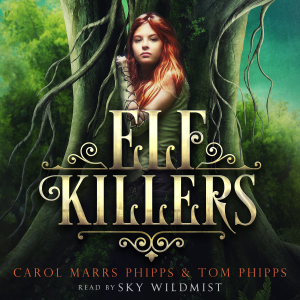 "Not for the fainthearted! Kids die horribly, and amid the trolls jockeying for leadership is trial by head bashing."

For the Elves, it's the very worst time to be in the woods.

Trolls are hunting them down.

Will they live long enough to reach a safe place to live?

Oisin's plan is to come with his bow to help Aedan and Doona lead a party of children into the forest to gather the maidenhair seedlings his people would take across the sea as they flee the trolls who hunt them as prey. Maybe he can be back in time for supper. And if he only dares to dream, he might also be back in time to speak with Doona alone.

Dyr's plan is an early evening head smash for the foolish Elves who think they can steal away to the sands of the endless eye sting water and build their strange float huts. They will make a glorious feast.

But on the way, Dyr's brutes stumble across Oisin's gathering party and attack, leaving Aedan mortally wounded and scattering Doona and the children to flee in terror into the dark mountain woods, only to be run down and captured by the bloodthirsty trolls.

Can Oisin find the bonfires of the trolls and rescue them before it's too late?

And what then? Will any of them live long enough to reach safety?

"Elf Killers is about death...and life. Seriously imaginative (especially troll-speak!) and gritty in action and battle, this is worth a read...but be prepared! Oh, be prepared. I dare you to grab a copy!"

Warning: If This Were a Film It Might Be Rated R

PLEASE NOTE: When you purchase this title, the accompanying PDF will be available in your Audible Library along with the audio.