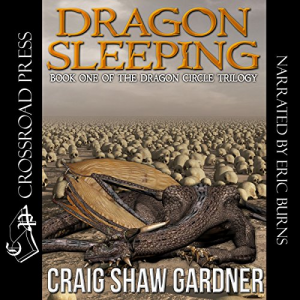 With this epic tale of the imagination, the best-selling author of Batman and other acclaimed novels crosses the boundaries between reality and fantasy. The Dragon Circle is Craig Shaw Gardner's biggest, most ambitious work to date, a spellbinding fantasy saga in the tradition of Tad Williams and Robert Jordan.

1967: Chestnut Circle is an average suburban community inhabited by ordinary people - teenagers, housewives, retirees. Seventeen-year-old Nick Blake's only major worries are homework, high school, and how to date the pretty girl across the way.

Then a fierce storm strikes the neighborhood and, overnight, all of Chestnut Circle is transported to an enchanted realm unlike anything its residents have ever known. The sky is suddenly a different color, an ancient forest surrounds their homes - and a sword-wielding army advances upon them.

Summoned by awesome mystical forces for reasons unknown to them, Nick and his neighbors are thrust into the center of a dire sorcerous conflict between two warring wizards for control of an immortal, all-powerful dragon. Now, whether he likes it or not, Nick must choose sides - and perhaps become a hero.